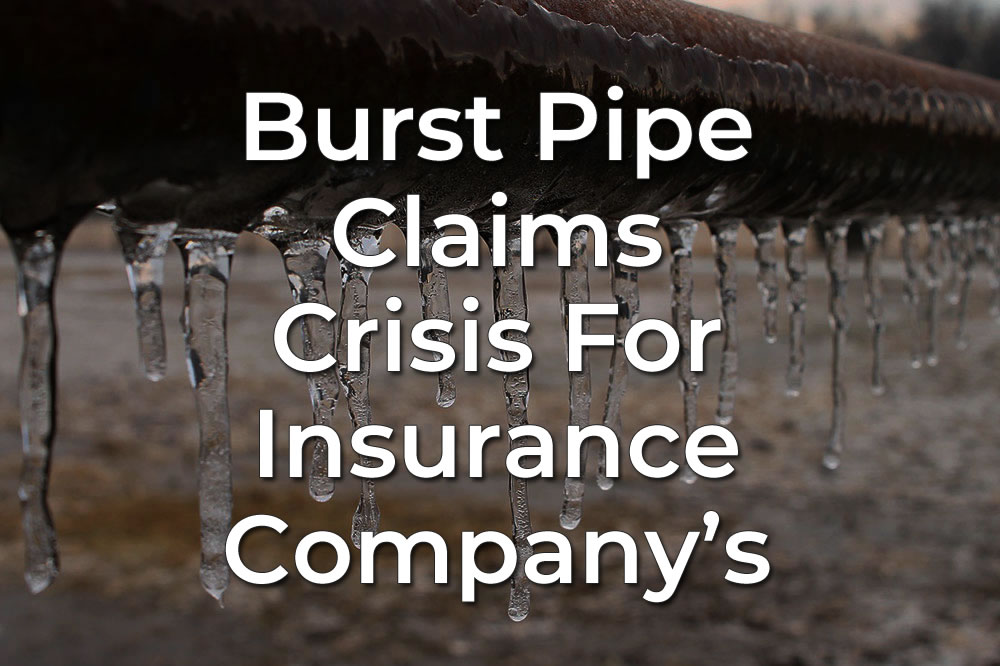 Insurers will soon be inundated with burst pipe claims due to adverse weather and thawing snow. Over the last week Public Loss Adjusters have been approached by hundreds of policy holders seeking help and advice due to properties suffering from burst pipes, flooding and storm damage. Find out how Public Loss Adjusters can keep your burst pipe insurance claim one step ahead by taking advantage of the services that we can offer.

With storms and sub-zero temperatures causing heavy snow and ice causing pipes to burst, water damage and flooding, many policy holders are starting to submit their insurance claims. The end of April and beginning of March will become a period of time that all major insurers would rather forget.

Home owners, businesses and local councils are now counting the cost of the unprecedented damage that has been caused by the Beast from the East and Storm Emma.

Just as homeowners and businesses think the worst is over, there are currently flood alerts across the whole of the UK due swelling rivers as the snow melts away. Scotland in particular currently has 7 flood warnings in place at the time of writing.

Even as the UK starts to recover, weather forecasters are predicting another storm aptly named as The Pest from the West to hit the UK mainland this weekend. Bringing with it more bitterly cold temperatures, heavy downpours of rain and up to 15cm of snow in Scotland.

Water Damage on an Unprecedented Scale!

Our Loss Adjusters and insurance claims management team have already been contacted by 100’s of worried policy holders mainly due to burst pipes within their properties. Many of our clients have suffered from burst pipes within the loft area causing substantial damage throughout their homes.

With reports of bowed ceilings breaking under pressure, water damage has spread through to plasterboard, furniture, appliances and flooring. Other external water leaks have caused damage to multiple neighbouring properties on the same streets.

There are many reports of flooding in schools and businesses across the UK. Many roads have been closed leading to dangerous driving conditions as the water turns to ice. Many towns and cities are currently suffering from water shortages and are providing water bottles until all the burst pipes are identified and repaired.

1000’s of Burst Pipes Throughout The UK

Throughout the country there have been 1000’s of burst pipe causing several millions of pounds worth of damage. Businesses have been forced to close, waiting for insurance loss adjusters to assess their losses whilst they count the cost of the damage that has been caused.

Hundreds of homes have been damaged by burst pipes. Public Loss Adjusters have in fact had numerous calls where the pipes have burst in the lofts of the policy holders’ homes. This has caused ceilings to buckle from the pressure of the water leading to flood damage throughout their properties.

Water Damaged Areas That Have Been Affected

Two of the largest employers in Birmingham had to temporarily stop production after a burst pipe crisis. Water supplies were cut to Jaguar Land Rover in Solihull and Cadburys Bournemouth site. On Monday Severn Trent Water confirmed that they didn’t know when the burst water pipe shortage chaos would come to an end.

Severn Trent have made bottles of water available to Birmingham residents who had faced water shortages in Harborne, Longbridge, Ladywood and Walkers Heath. They stated that the rapid thaw had resulted in an unprecedented number of broken pipes around the area.

Meanwhile the West Midlands Ambulance Service recorded its busiest day ever. In fact, they received over 5000 calls in one day. This was mainly due to heavy snow and people were ignoring other NHS services that were available, instead opting to dial 999.

Severn Trent Water have also been delivering emergency supply bottles to homes across Derbyshire as they fight to fix damaged water pipes that have leaked during the cold weather. Many homeowners who have been left with no running water will be offered compensation from Severn Trent.

Burton were experiencing either low water pressure or no water at all due to high demands. Residents had been asked to only use water if it is essential whilst they struggle to meet demands. Reports now confirm that the majority of water is now back on.

This follows residents of Sudbury and Doveridge being left without water for 2 days which was followed up by another major burst as Storm Emma continued.

Waseley Hills High School in Rubery had to close six science labs, four maths classrooms and two toilet blocks. This was due to a burst tank that had also leaked water into the power and heating systems,

In Bolton, St Catherine’s Academy had to close because of a leaking pipe due to cold conditions. Due to having no hot running water, parents were texted to pick up their children. Many businesses were forced to close due to flooding in the Market Place Shopping Centre. This affected many stores including The Vaults, The Lost Valley Adventure Golf Course, The Bank Restaurant and New Look

A burst water main led to a fire at Environmental Agency premises in Warrington. This was caused by water leaking onto an electrical installation.

Meanwhile in Lincoln city centre roads had to close due to a burst water main. Causing delays for motorists, Silver Street and Mint Street were closed whilst repair works were carried out. Again, local residents reported low pressure or not water at all.

The Brize Norton Primary School in Oxfordshire had to temporarily close for the day after a water pipe broke in its hall. Thames Water also issued a warning of more burst pipe to come after the freezing temperatures make way for a rapid thaw.

Scottish Water have teams on location in St Margarete’s Hope area, South Ronaldsay and Burray today to try and locate the burst mains in those areas. In fact, they have been asking the public to pinpoint any water mains bursts in order for the water supplier to repair them as quickly as possible.

In Glasgow, residents have been left without water caused by a burst main in Hillhead. Many properties within the G12 postcode have reported discoloured water running through their taps. A flood alert is now in place as the snow begins to thaw.

In West Fife trains from Dunfermline and Rosyth were cancelled due to flooding. On Wednesday National Rail reported that flooding between Glenrothes and Cowdenbeath was causing disruption. Only one early morning train made it through the route.

In Wales a burst pipe had lead to water freezing, creating a spectacular 20ft frozen geyser in bushes on a field in Cwn Soden. Click here to see the amazing pictures pictures printed by Wales Online.

Also in Wales, thousands of properties were left without water due to numerous damaged pipes. Welsh Water received over 200 calls from customers who were affected by burst pipes from worried customers. On Sunday night people queued for bottled water as a burst pipe left many without a water supply.

Homes and businesses in Gwent were left counting the cost. The extreme weather had caused burst pipe and boilers to stop working. Penygarn Community Primary School in Pontypool and New Inn Primary School had to close due to boiler issues. Training Mind offices in Blaenafon suffered flooding from burst pipes and had to close.

What do Public Loss Adjusters recommend to prevent burst pipes during cold spells? We suggest the following when temperatures drop below 2 Degrees Celsius:

How Can Public Loss Adjusters Help with Your Burst Pipe Insurance Claim?

Public Loss Adjusters would like to reassure policy holders that we are here to help each and every one of you who are looking for help in managing their property claims. Our insurance claims management experts are only a free phone call away.

We are glad to offer free help and advice if you require and can also manage your insurance claim to ensure that you receive your full entitlement. Once you appoint Public Loss Adjusters we can take over all negotiations directly with your insurer.

Working on your behalf we are here to put your interests first to ensure your claim is dealt with promptly and professionally. We can even recommend the contractors that we would use if we were in the same situation. All contractors we recommend are fully experienced in repairing properties that have been water damaged due to burst pipes.

If your policy includes alternative accommodation if required, and it is included with your insurance policy, we can arrange this on your behalf. We also have the ability to negotiate interim payments if needed to ensure that you are not caught short whilst your water damage claim is being negotiated.