Burst Pipe Insurance Claims & How We Can Help 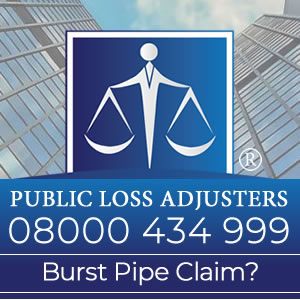 Do You Remember The Burst Pipe Insurance Claims Crisis in 2018?

Looking back, after the spring of 2018, Public Loss Adjusters managed 100’s of burst pipe claims from worried policy holders. This was due to adverse weather conditions that affected the whole of the UK.

Today, Public Loss Adjusters can keep you one step ahead with burst pipe claims. We talk about prevention and if you’re unfortunate enough to suffer a burst pipe, also about the services that we can offer.

So, What Happened After The Beast From The East and Strom Emma?

After the Beast from the East, Public Loss Adjusters were approached by hundreds of policy holders seeking help and advice due to properties suffering from burst pipes, flooding and storm damage. Insurers were inundated with burst pipe claims due to adverse weather and thawing snow.

With storms and sub-zero temperatures causing heavy snow and ice causing pipes to burst, water damage and flooding, many policy holders were starting to submit their burst pipe claims.

Early spring was a period of time that all major home insurers would rather forget. Home owners, businesses and local councils counted the cost of the unprecedented damage that was been caused by the Beast from the East and Storm Emma.

Just as homeowners and businesses thought the worst was over, there were flood alerts across the whole of the UK due swelling rivers as the snow melted away. Scotland in particular had 7 severe flood warnings in place at the time. Even as the UK started to recover, weather forecasters predicted another storm, aptly named as The Pest from the West to hit the UK mainland the following weekend.

Bringing with it more bitterly cold temperatures, heavy downpours of rain and up to 15cm of snow in Scotland.

Water Damage on an Unprecedented Scale!

Our Loss Adjusters and insurance claims management team had already been contacted by 100’s of worried policy holders mainly due to burst pipes within their properties.

Some of our clients had suffered from burst pipes within the loft area causing substantial damage throughout their homes. Many more were away from home and never discovered the damage until after the event. These were the homes that were damaged the most! With reports of bowed ceilings breaking under pressure, water damage had spread through to plasterboard, furniture, appliances and flooring.

Other external water leaks had caused damage to multiple neighbouring properties on the same streets. There were many reports of flooding in schools and businesses across the UK. Many roads had been closed leading to dangerous driving conditions as the water turned to ice. Towns and cities were suffering from water shortages and councils provided water bottles until all the burst pipes were identified and repaired.

Millions of Pounds Worth of Damage to Homes and Businesses

Throughout the country there were 1000’s of damaged pipes causing several millions of pounds worth of damage. Businesses had been forced to close, waiting for insurance loss adjusters to assess their losses whilst they counted the cost of the damage that had been caused.

Thousands of homes were damaged due to burst pipes. Public Loss Adjusters had numerous calls where the pipes had burst in the lofts of the policy holders’ homes. This had caused ceilings to buckle from the pressure of the water, leading to flood damage throughout their properties. Property insurance claims were on an unprecedented scale!

What do Public Loss Adjusters recommend to prevent burst pipes during cold spells? We suggest the following when temperatures drop below 2 Degrees Celsius:

How Can Public Loss Adjusters Help with Your Burst Pipe Insurance Claim?

Public Loss Adjusters would like to reassure policy holders that we are here to help each and every one of you. Just get in touch for help with burst pipe claims. Our insurance claims management experts are only a free phone call away.

We are glad to offer help and advice with burst pipe claims if you require. We can also manage your insurance claim to ensure that you receive your full entitlement. Once you appoint Public Loss Adjusters, we can take over all negotiations directly with your insurer.

Working on your behalf we are here to put your interests first. We ensure your claim is dealt with promptly and professionally. We can even recommend the contractors that we would use if we were in the same situation. All contractors we recommend are fully experienced in repairing properties that suffer damage from water due to burst pipes.

If your policy includes alternative accommodation, if required we can arrange this on your behalf. We also have the ability to negotiate interim payments if needed. This will ensure that you are not caught short whilst negotiating your water damage claim.

Why Use Our Insurance Claims Management Services?

END_OF_DOCUMENT_TOKEN_TO_BE_REPLACED

All News
Get Help Now